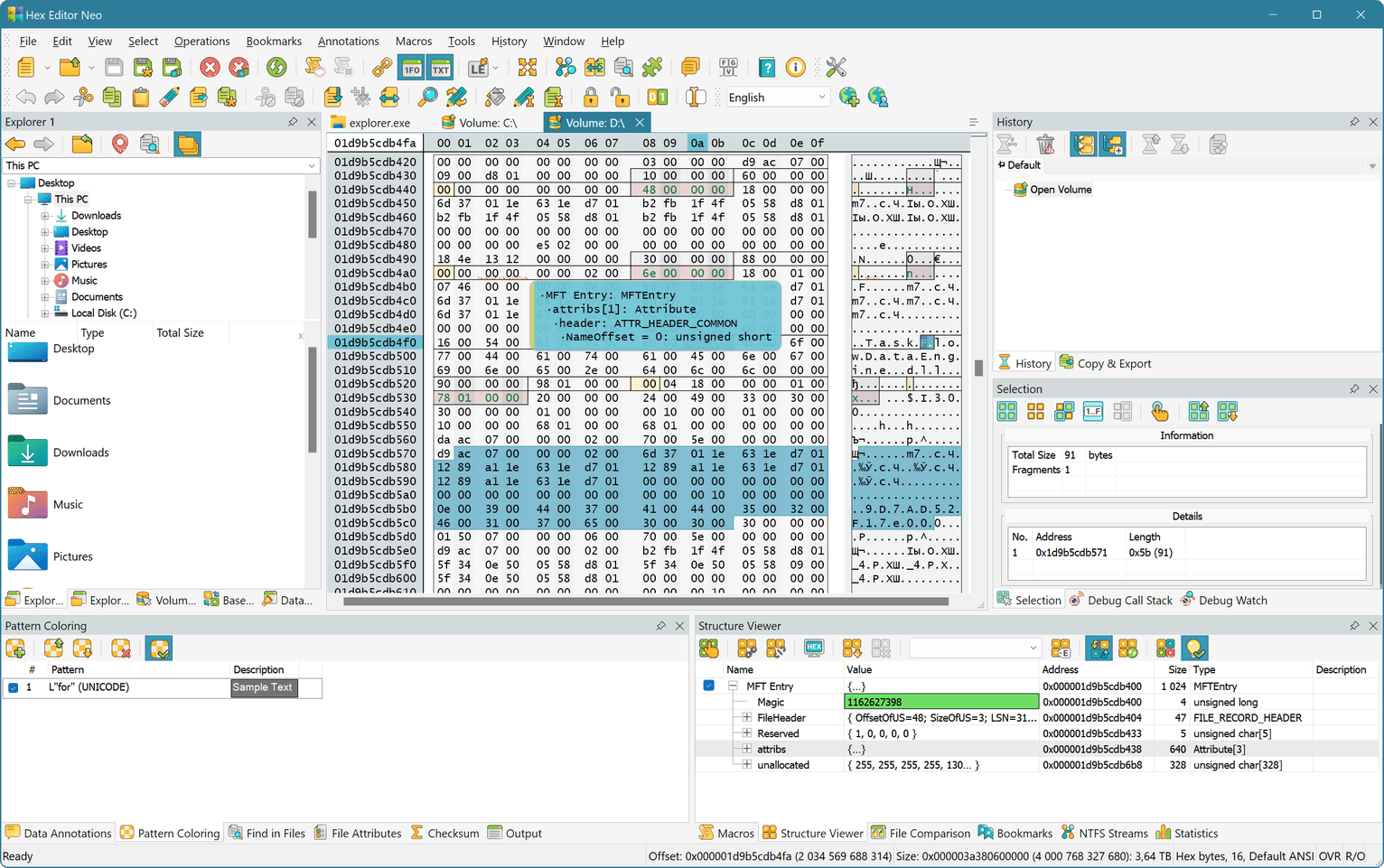 Any loaded or created file is called a document in the editor. There is at least one editor window for each document. For convenience, multiple editor windows may be opened for a single document, each having its own properties (view type, encoding, cursor position and selection). Hex Editor Neo provides a very flexible window organization tools, including window splitting and separating the workspace with frames. A huge set of supported encodings allows you to interpret (and edit) document's data in different ways.

Large set of data operations allow you to modify data in large blocks.

Hex Editor Neo fully supports NTFS alternate data streams. Several special tools are provided that simplify working with streams and even locating them on your computer.

A full “basic” editing command set is supported by the editor: you can modify data, insert data, delete data and change file's size. In addition, advanced editing commands, such as Fill and Insert File are provided.

Even more powerful Find All command is capable of locating all pattern occurrences and returning them as a selection. It's needless to say that selection is fully browseable and can be saved to a file or exported as a text file.

Yet more powerful Replace All command does it all in one step: locates all occurrences of the pattern in a file (or a selection - all Hex Editor Neo commands support multiple selections) and replaces all of them with another pattern. Again, pattern sizes may differ and replace pattern may be empty. The latter case is equivalent to using the Find All command and then the Delete command with only difference that Replace All command operates much faster!

Find in Files and Replace in Files commands do the same for a group of files. These commands are extremely powerful and provide a flexible setup. They are also capable of utilizing the full power provided by the multi-core and multi-processor computers.

Hex Editor Neo supports in-product scripting (in addition to File Scripting Interface, which allows external applications to utilize the power of the editor's engine), allowing you to automate most editing tasks. There's also a Record Macro command that automatically records all user actions as a script. The recorded macro may later be played back, applying the same actions either to the same or completely different document.

A number of user interface features, such as toolbars and tool windows are all called to simplify most everyday's tasks and make editing faster and simpler.

Every aspect of the user interface is customizable. More detail is provided in corresponding documentation sections.