A monitoring session may have a special filter, called capture filter, configured. This filter is applied at the earliest point of time, before the monitored packet ever sent for data processing, including Data Recording. It allows the user to effectively filter unneeded packets out before sending them to expensive processing. Capture filter uses currently loaded protocol definitions.

Capture filter is specified in the Session Configuration Window. 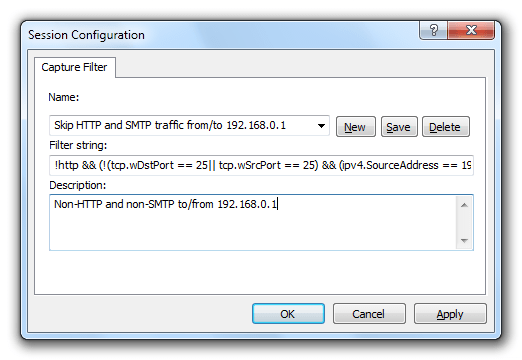 Use this window to select a display filter from a list, or enter the filter string manually, give it a name and save.

It is allowed to add, change and remove the capture filter of a running session.

Filter expression supports special kinds of immediates in addition to standard ones:

When the user types new filter expression, available fields are automatically suggested using the auto-completion engine. However, this engine is limited in its functionality and the user is advised to consult the source code of used protocols.

The following filter passes only Serial Input/Output Control packets (IOCTL). This expression evaluates to true if and only if there is a sub-field io in the bound serial field:

The following filter passes only packets that has non-empty payload:

The following filter passes only packets sent to or received from 192.168.0.1: